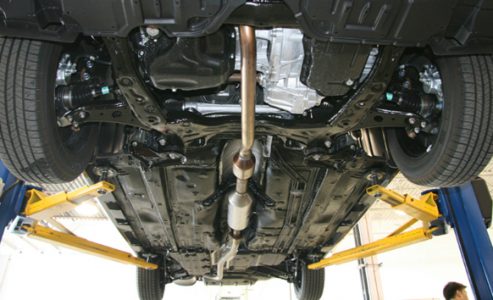 Is your car rust-proofed? If you have recently noticed a build-up of rust on your car’s exterior, you may be wondering whether or not it is finally time to have your car rust-proofed to avoid future problems with rust-build up. The following is an essential guide to understanding how and why rust forms on cars and what you can–and should–do to prevent it.

Rust is a material that forms on metal surfaces that are exposed to a combination of moisture and air over a period of time. Rust occurs due to metal oxidation, which is especially common during periods of extreme temperature and weather changes, such as the winter and periods of seasonal changes. The salt commonly found on roads in the winter can also promote rust development.

The most common areas rust forms on a vehicle are:

If you see metal forming on your vehicle, you need to act FAST. If rust is allowed to build-up for too long, it will permanently damage the structural metal on your vehicle; rust damage cannot be reversed, so it’s vital that you take immediate action when you see any rust-build up. You must also do what you can to prevent rust formation in the future.

If you see rust building on your car, take your car into a professional car detailer Ottawa to have it taken care of professionally.  They will be able to tell whether or not your car’s structural integrity was damaged by the rust.

The auto detailer Ottawa will likely recommend that you get your car rust-proofed as soon as possible, which is the best way to prevent rust build-up in the future. You should have your car professionally rust-proofed before the winter season, as winter often makes for perfect rust-development conditions.

Remember: rust can potentially damage the structural integrity of your car permanently and it needs to be taken seriously. If you haven’t already gotten your car rust-proofed by a professional car detailer Ottawa, then now is the time; and if you do spot rust on your car, make sure to have it taken care of right away to prevent serious damage.